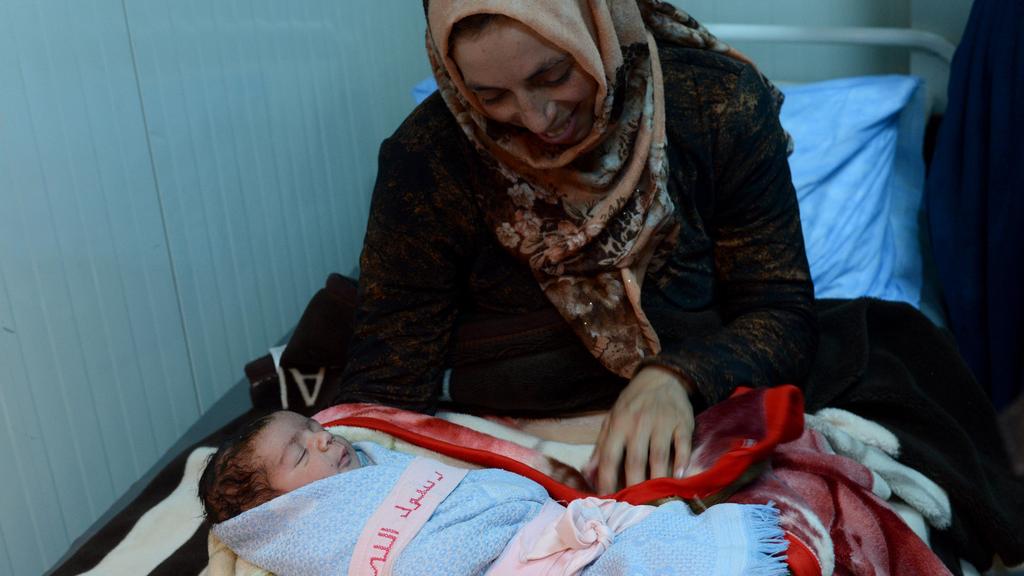 UAE Red Crescent Hospital provides medical treatment to Syrian refugees in Amman, babies are born there everyday and given a chance at a safer life.

AL MAFRAQ, JORDAN // Hannan Al Darwish smiles with joy as she cradles her newborn daughter. Saturday was one of the happier days since she fled the violence of Homs.

Her daughter will be brought up in a far safer place and, while almost everything in her life is uncertain, she will hold her close and love her dearly.

The 28-year-old names the girl Shamma, after Sheikha Shamma bint Sultan bin Khalifa Al Nahyan, founder of Beacon of Hope UAE, which is bringing solar-powered light to refugee camps in Jordan and was touring the UAE-funded hospital on Saturday.

Sheikha Shamma kissed Hannan and her daughter and wished them well, creating a lasting impression that will not be forgotten quickly.

Shortly afterwards, the unmistakable first cries of another newborn child are heard in the halls of the UAE Red Crescent Hospital, which provides medical treatment to Syrian refugees in Amman.

This time it’s a boy and he is named Zayed, after Sheikh Zayed bin Sultan bin Khalifa, Sheikha Shamma’s brother.

Sheikha Shamma was on a tour of the hospital in the Al Mafraq area, 20 kilometres from the Syrian border.

She and her team were looking at ways to improve the lives of the more than 250,000 patients that have been treated in the hospital.

Beacon of Hope is handing our solar lights in camps that are accustomed to power cuts, but it is also promoting education and new medical technology.

The technology it is rolling out is aimed at helping doctors identify medical problems in newborns.

In particular, it looks to tell the difference between problematic heart murmurs and benign ones.

Benign heart murmurs occur in more than half of the children born around the world and disappear over time, but misdiagnosing costs hospitals millions.

Using a digital stethoscope connected to a smartphone, the technology is able to use algorithms to discover whether a murmur is benign.

Shamma and Zayed will benefit from the checks, which is still in the testing phase but is being used on patients.

“We checked out two newborn babies with the technology, Shamma and Zayed,” said Sarah Bawazir, an advisory board member for Beacon of Hope.

“The technology can be hugely effective in areas without specialised doctors, as it can reliably determine if a murmur is dangerous.”

The device is helpful for advanced hospitals, as often a general practitioner will find difficulty determine the type of murmur, she said.

“Right now it’s in research phase, but once it passes we are looking to take it around the world with us and donate it to hospitals.”

The Red Crescent hospital is on the front line of the refugee crisis, treating families who had fled their homes with little more than the clothes on their backs.

It ensures that they receive the best health care despite the challenges of operating close to the border.

With an emergency wing, it is often the closest hospital for wounded Syrians.

The Beacon of Hope team has spent the last three days in Jordan visiting refugee camps around the country and donating thousands of solar lights and books for refugees in an attempt to promote education.

“Even if we prepare for this advance and we think we know what we’re going to see, it’s still heartbreaking,” said Mohammed Al Ghailani, another advisory board member who spoke of the sheer challenge that is the refugee crisis. “Seeing the extent, and even given all the great work the UAE has done in helping refugees, we want to add to that.”

Beacon of Hope UAE, a non-profit organisation, was founded by Sheikha Shamma bint Sultan bint Khalifa Al Nahyan and aims to provide children in war-torn and poverty-stricken countries with lights and literacy.

Sheikha Shamma, along with co-chairwoman Larisa Miller and her team, travel around the world and provide a basic engineering lesson in how to build a simple solar powered light.

The solar light project by Beacon of Hope UAE was part of its mission towards “light, literacy and life”.

Included in the solar-light assembly box, is circuitry for the solar panel to be connected to rechargeable batteries that allows the recipients light for hours.

The project aims to improve the health of youth living in camps by providing an alternative to kerosene lamps, which can cause lung issues and even death in some cases.

The organisation also distributes books to the children straight from Sheikha Shamma’s group and Dubai Cares.

It is also working on developing medical technology that will help doctors diagnose infant illness through the use of simple and cheap digital technology.

A stethoscope attached to a smartphone app will allow medical practitioners to identify malignant heart murmurs, while face-detection technology can help them identify genetic disorders.

The project was founded in 2016 and is active in Jordan, Liberia, Morocco, and other countries around the Middle East and North Africa.

It profit is looking to launch in Iraq and Egypt in the coming months.

Their collaborators include Akon Lighting Africa, run by the American rapper of Akon, UAE Red Crescent, and various UAE governmental and non-governmental organisations.