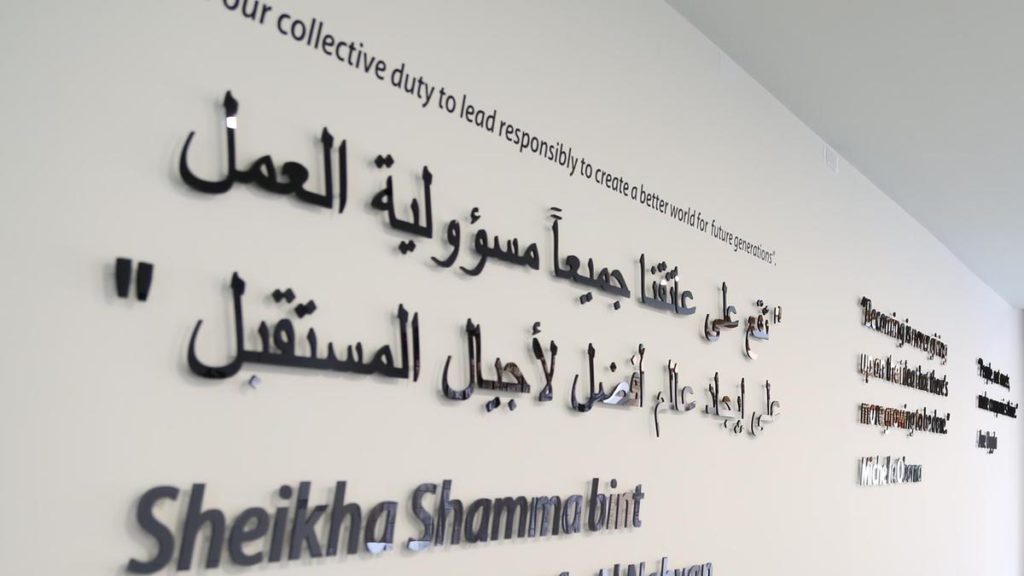 A quote written by Sheikha Shamma bint Sultan bin Khalifa Al Nahyan displayed at the Moller Institute at a college in the University of Cambridge.

The words of Sheikha Shamma bint Sultan bin Khalifa Al Nahyan have been immortalised in the halls of a British Centre for Excellence at the University of Cambridge.

The great granddaughter of UAE Founding Father Sheikh Zayed is the first Arab woman to be recognised at the Moller Institute at Churchill College, for her work towards sustainability.

Her quote — “It is our collective duty to lead responsibly to create a better world for future generations” — joined inspiring words from the likes of Nelson Mandela and Steve Jobs on Thursday.

Displayed in English and Arabic, her quote sits beside one from Michelle Obama, former First Lady of the US.

It is a rallying cry for everyone to show leadership by seeking out more sustainable alternatives in their lives.

Sheikha Shamma, chief executive of Alliances for Global Sustainability and a columnist for The National, recently completed a master’s degree in sustainability leadership and, on Saturday, graduated from Robinson College, Cambridge. Her final dissertation was on the entrepreneurial intentions of refugee youth with a focus on young girls.

She warned that 143 million people were at risk of becoming “climate change refugees” if urgent action is not taken.

Despite only completing her postgraduate studies last year, Sheikha Shamma said she was already using the knowledge that she had gained during her course within her own organisation. Alliances for Global Sustainability brings private and public sectors together to find sustainable solutions across different industries.

Alongside her academic work, Sheikha Shamma is also a philanthropist and an entrepreneur. Her foundation Circle of Hope has managed a number of initiatives including a scheme to provide solar-light kits to more than 10,000 children in 10 countries.

The seeds for her thesis idea were formed back in 2011 when she visited a refugee camp in Mogadishu, Somalia to deliver aid.

“That was the first time that I saw refugees. It was because they were going through a drought that they had food shortages and that’s what got me thinking a lot more about refugees and climate migration,” she said.

Sheikha Shamma said her quote was inspired by her forefathers, including Sheikh Zayed. She described him as an innovative leader who improved the livelihoods of many people around the world, adding that she was “proud” to be his great-granddaughter.

“In only four decades, this man, who was born a Bedouin, achieved something that was thought impossible and changed the future of his nation forever. I am lucky to have been born during his leadership and have witnessed for myself the developments he made possible,” she said.

“My dearest wish is to continue his work by doing all I can to make this world a better place and leave it into a better state for generations to come.”